Since 1994, creation of the first festival, Métiss’age has united more than 5000 artists and 100000 spectators.
Unique experiences are born from this “hotchpotch”. The spectator travels from techno to opera, from painting to oriental dance, one is able to adapt and be open-minded. Exhibitions (painting, sculpture, photos…), projections (short films and documentaries…), concerts (rock, opera, classic, pop, world, jazz, electronic…) and live shows: dance, theatre… Artists from across the globe and all horizons.

The aim of Métiss’age: to create a connecting point and to favour exchange.
A monumental piece of art, an event where the public becomes the principal actor: Since 2000, under the direction of a team of artists (Cédéric Cavalier, Alexis Fraiklin, Olivier Lannaud, Miss Led, Mook), the public was invited to participate in the creation of gigantic fresques on the street. 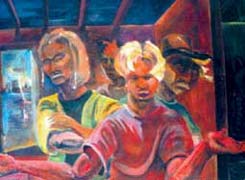 On the 6th of August 1992, Jonathan Lawrence Foli Coe took his life. He was only 21. At an age when one is most alive, he chose to disappear to the other side because his own no longer suited him. Like Jonny, many young people confront similar difficulties in finding their true place in this more and more individualistic and standardised world. It is in this perspective that we wish to modestly make tribute to a celebration, with space and strength, creative energy and free imagination.

To never forget Jonny and all those who once felt their lives not worth living for.

For all those who believe that fulfilling dreams in the wind is not only for a pretentious marginal class;
to say yes to solidarity, to volunteering and no to exclusion;
to guide and to never dictate;
to open our eyes on the world that surrounds us;
for all these reasons and many more, we chose to elaborate a creative and different project: Metiss’age Festival.

Metiss’age Festival has no other ambition but to become the symbol of a generation that believes in fundamental values of mankind.